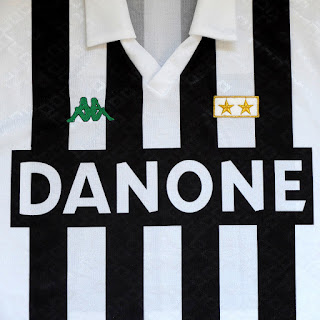 When Ian Rush finally joined up with Juventus in the summer of 1987, after being loaned back to Liverpool for the previous season, Michel Platini informed the Welshman he’d arrived two, maybe three years too late and that the club was entering a period of transition. Most of the players Rush had played, and lost, against in the European Cup Final two years earlier had moved on – Zbigniew Boniek, Paolo Rossi, Maro Tardelli, etc. – while Platini himself had confirmed his retirement. Antonio Cabrini and club captain Gaetano Scirea were still present but well past their prime, Scirea having just turned 34. They did have Michael Laudrup, but he was not at this point anywhere near being the player he would later become at Barcelona.
What might also have frustrated Rush was the fact that his new shirt was a museum piece in comparison to the natty number he’d been wearing at Liverpool. Italian sportswear companies were slow to more on from acrylic, and although the current shirt wasn’t unattractive, it would have seemed relatively heavy and overly long. Just to really rub it in, no sooner had Rush returned to Liverpool than Kappa got their act together and started utilising contemporary fabrics.


The change in material did not have an immediate impact on Juventus’s form. Nor did the arrival of Portuguese Rui Barros or Ukrainian Oleksandr Zavarov. What did appear to signal an upward turn in the club’s fortune was the acquisition of Salvatore Schillaci from Messina, Pierluigi Casiraghi from Monza, and taking on department-store chain Upim as patron in place of home-appliance manufacturer Ariston. 1989/90 was a good season for the ‘Old Lady’ that saw them lift both the Coppa Italia, narrowly beating AC Milan, and the UEFA Cup, comfortably beating Fiorentina.
The jersey in which Juventus ended their three year barren spell incorporated hollow, inverted, micropatterned squares forming part of a larger matrix of hollow, inverted, micropatterned squares (it’s very hard to find pictures that do this motif justice). It was a nice shirt but suffered from a lack of colour, and the absence of the club’s crest; in its place, just two gold stars signifying over 20 scudetti won. When the actual scudetto – or even the coccarda – adorned the shirt, then it became a thing of great beauty. 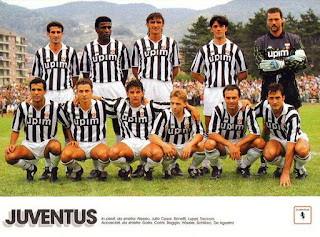 Despite winning two trophies, Juventus had come no nearer to landing the championship, finishing fourth, and manager Dino Zoff was shown the door. He was not alone: Zavarov was out, as was Belarusian Sergei Aleinikov, who’d only lasted one season, and so too Rui Barros, who moved on to Monaco. The new coach, Luigi Maifredi, brought with him defender Marco Antonio De Marchi from Bologna, and was also provided with World Cup winning midfielder Thomas Häßler, Brazilian defender Júlio César, and attacking midfielder, and national hero, Roberto Baggio, who claimed his transfer from Fiorentina had been forced upon him.
1990/91 did not go as planned, for which Maifredi paid the ultimate price. However, as winners of the previous year’s Coppa Italia, Juventus bore the coccarda. Moreover, Kappa decided that their company’s logo – the silhouette of a man and woman sat back-to-back – should now be coloured green. This minor detail meant that when the coccarda was absent the following season the shirt maintained its visual interest. Indeed, it seemed to look better without the scudetto or the coccarda, the green Kappa logo on the right side singularly complementing the two gold stars on the left.
In the meantime Juventus had reappointed Giovanni Trapattoni as coach, the man who had previously guided the club to six titles within nine years (the period Platini was referring to when lecturing Rush). In his first season in charge Juventus finished second in the league behind champions AC Milan. In 1992, food producer Danone took over as sponsor and the shirt’s V-neck was trimmed, otherwise the kit remained very much the same. Trapattoni then guided Juventus to their second UEFA Cup victory in four years, beating Borussia Dortmund 6-1 on aggregate, and then in 1993/94 finished Serie A as runners up – again losing out to AC Milan – before ‘Trap’ left to take over at Bayern Munich. 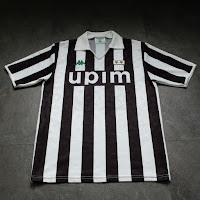 1991/92
Depending on how you like your collars and fonts will determine which iteration of this kit you prefer. Personally, I think the Upim version edges it. In any case, the phlegmatic Frenchman was right: Juventus had been a team in transition. By the time they secured the title in 1995, under the stewardship of Marcello Lippi, Kappa had ditched their green insignia, reverting to black, and started doing terrible things to their shirts’ neckline. Lotto would soon take over as supplier, and later Nike, but neither would come close to offering the simplicity and purity of design Kappa provided during this transitory phase in the early 1990s.

JDEvans
Sidle out of the store gingerly...