THE SARTORIAL ELEGANCE OF SERIE A 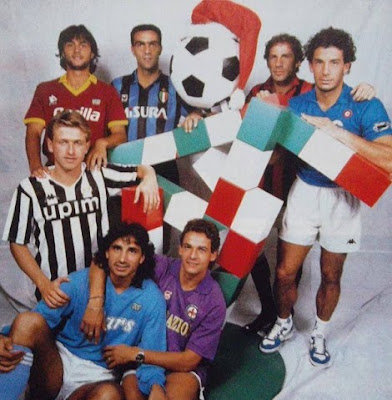 It all went wrong in 1989. Strange detail started to permeate the shirts of England’s old First Division: white triangular 'expressionistic' flecks on Liverpool’s Candy sponsored jersey, a terrible zigzag effect making a mess of Manchester City’s, and a similar geometric mash-up staining Chelsea's and Everton’s. At least the shirts still fitted.
Meanwhile, on the continent the football kit was reaching its zenith, Italy at the epicentre of it all. AC Milan and Internazionale were exploiting stripes in a manner rarely bettered, with away kits that were possibly even smarter still. In Spain, Barcelona were strutting around in a contender for the best football shirt of all time, an almost skin-tight affair that Gary Lineker was lucky enough to sport for the entire three years he spent playing for the Catalan giants. Anderlecht, Auxerre, Ajax… You should see the jerseys they were wearing in Brazil.
In fairness, English clubs too had contributed to this wealth of taste. Adidas and Umbro dominated the market, refining a classic template that would flatter the most incongruous of club colours: simple collars, minimal trim, subtle micro-patterning, pared down club crests adorning sensibly sized kits that flattered the physique. Back then it was not unusual for teams to wear the same kit for as many as three consecutive seasons, and so any changes came gradually. Tottenham and Arsenal, for example, were assured sartorial clemency until the summer of 1990, protected from those bizarre experiments introduced a year earlier.
It was during Italia 90 that it became evident that those strange goings-on in England were more than a mere aberration. Ironically, Umbro did quite a good job with England's jersey. Sure, there was a spot of striped, buttoned-up tomfoolery playing about the collar, but it fitted okay and the colour scheme remained as it should (we’ll forget the third kit ever happened). Indeed, the better teams that qualified for that World Cup got off lightly, a slight loosening of fit being the worst crime committed against the shirts of Argentina, Brazil, Holland, West Germany and the hosts, Italy. Instead, it was in the strips of nations like Romania, Columbia, the USA, Cameroon and Czechoslovakia (all manufactured by Adidas, incidentally) that one could see sewn the prophecy of the football shirt gone mad – excessively silky fabrics, ultra-wide V-neck collars, misplaced stripes, a looser fit.

Timothy Winter, Dean at Cambridge Muslim College – aka Sheikh Abdul-Hakim Murad – once said of football that it, “has everything that is important to religion: solidarity, skill, ritual, the outward form of what looks like a sacred congregation. Except it's not about anything."
The Dean is right: football – all sport – is inherently absurd and cannot therefore really be about anything. But then life is absurd, and religion is the absurdist thing of all, because it denies the absurdity of existence and considers itself profound. In a practical sense, its remit is political – join our club – but where religion does pretend to ask ontological questions, we’re led to believe the answers are there waiting for us, bound up in sacraments and holy rites – a state of denial if there ever was one. At least sport revels in its own absurdity, existing merely for its own sake.
Or does it? It goes without saying that there’s a lot of money tied up in sport – especially football – but that doesn’t necessarily make it any less self-aware of how ridiculous it is. [If I’ve already lost you, please take a moment to ponder what actually goes on in a game of football: two teams of eleven try to deposit a spherical object into separate rectangular spaces using only their feet. One player on each side is entitled to use their hands to prevent this from happening, but only in restricted zones. Technically, you’re only supposed to make contact with the ball. After 90 minutes, the team that has made more deposits is afforded privileges.] For the absurdist philosopher Albert Camus it was the beauty one encountered in life that did for meaning, and there is surely beauty in football. This is why sport fans should care less about results and more about the aesthetic accoutrements it drags along behind it, for to take sporting outcomes seriously is an act of elusion, just as credulously taking somebody’s word that they know god’s will also is.

Back to Serie A. What was it about those shirts that resonates to this day? We need to start in the early 1980s when, like with cycling jerseys, football kits were beholden to their material: heavy acrylic with a tendency to stretch and hang. They looked pretty good actually, but on closer inspection, a little cheap. Take Michel Platini decked out in Juventus colours: a flimsy excuse for a collar, plunging neck-line and, except when Juve were reigning champions and wore the scudetto, no shield to speak of. (This does seem to be a Juventus thing: other clubs more normally attached their badge to the upper arm.)
Then, for the 1986/87 season, S.S.C. Napoli introduced a real game-changer. Manufactured by newly conceived sports’ brand Ennerre, it was the jersey in which Napoli won their first Italian Championship, Diego Maradona at the helm. There was nothing particularly technical about this jersey – it was made from a crude cotton/wool mix called 'lanetta' – but it featured the club’s crest on the chest, a classic V-neck collar, was sympathetically proportioned and a pleasing shade of blue. 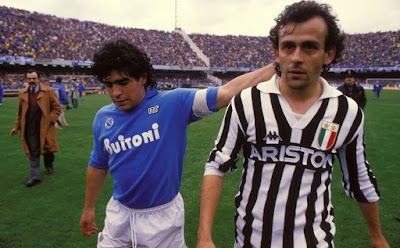 Maradona consoles Platini for having an inferior jersey.

1987/88: Kappa was the next company to raise their game, tidying up Juventus’s kit (still no badge though) and making a good go of AC Milan’s: a thin, traditional collar with no trim, a good width of stripe, the sponsor’s name MEDIOLANUM, replete with minimally obscure symbol, and the Kappa emblem – the silhouette of a man and a woman sat back-to-back – in white. AC Milan won the league that season, and the shirt looked even better the next with the scudetto sewn onto it. 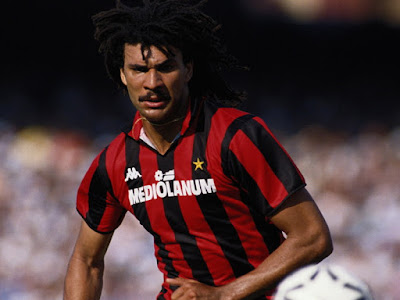 1988/89: Kappa took over Sampdoria from Ennerre, who hadn’t done a bad job. Sampdoria had won the Coppa Italia the previous season and thus bore the coccarda (a roundel in, as with the scudetto, the colours of the Italian flag) upon their breast. Sampdoria’s strip never fails to please. Comprised of blue shirts with a red, black and two white horizontal stripes wrapped around the trunk, with a crossed shield in the middle, it’s one of the most distinctive shirts of any league. Moreover, the club’s crest (now attached to the sleeve to make room for the coccarda) displays the silhouette of a shabby looking sailor smoking a pipe; the club colours bend sinister behind him. Shorts and socks are white so as not to detract (a jersey should never be judged in isolation but appreciated within the context of the entire kit).
At the same time German firm Uhlsport were providing for Internazionale and Bologna. These shirts were notable for their lack of give, which may or may not have been a deliberate ploy to prevent players from tugging at them. Back then Inter were using their short-lived ‘serpent’ logo, which is a bit more interesting that the montage of letters they’ve employed since. The hue of blue was slightly lighter than now, and the sponsor – Misura, a health food manufacturer – brought with it red dots that, along with the gold star denoting 10 title triumphs, added some welcome colour to the otherwise exclusively blue and black mix. The away strip was better still: same black socks, same black shorts, but a white shirt with alternative blue and black diagonal rhomboids in a line across the chest. 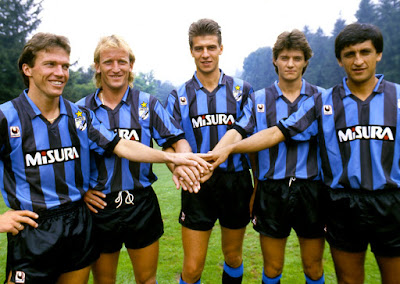 Matthaus, Brehme, Berti, Bianchi and Diaz looking smug, and who can blame them?

1989/90: When Italian sportswear company ABM took on Fiorentina’s kit the previous season, they’d provided a decent enough shirt [65% Polyester; 35% Cotton], but there was a problem: they matched  this with purple shorts. Moreover, these shorts, as is often the case, were made from a different material than the jersey. The effect was that Fiorentina weren’t actually playing in the same colour, but in two shades of the same colour, and two shades of a colour as vivid as purple. Perhaps sensing their error, Fiorentina were now issued with white shorts, giving them maybe the best strip in the division; the sight of Roberto Baggio battling against Juventus in that year’s UEFA Cup final is one of the era’s iconic images.
Inter still had the same strip but as reigning champions wore the scudetto in place of that serpent on a shield, with the circular montage of letters present on the upper arm. And Kappa finally got around to using the same template for Juventus that they’d been using for AC Milan, a lovely looking shirt sponsored by department-store chain Upim. 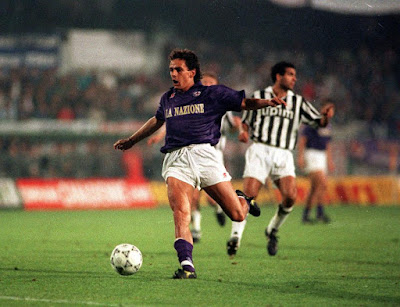 1990/91: Had the World Cup not been held in Italy, might things have remained as they were? Probably not, but if there’s a high water-mark for kit design it can be found here. Torino had bounced back from relegation two seasons earlier, and were rewarded with a contract with ABM, who kitted them out in almost the same strip: maroon shirts and white shorts with black socks, sponsored by white goods manufacturer Indesit. (Sadly for Fiorentina, ABM were supplying them with purple shorts again.) 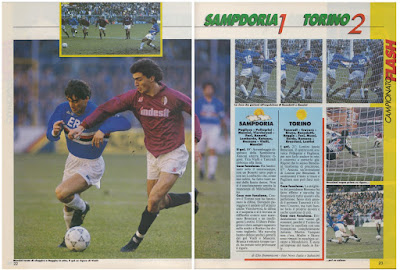 Unlike many of my generation, it wasn’t Channel Four’s Football Italia on a Sunday that provoked my interest in Italian football, but a VHS tape entitled 110 Goals Italia Style – 1988-89 (quickly followed by 110 Goals Italia Style 2 – 1989-90). I was certainly grateful for Channel 4’s effort when it came but was a more faithful viewer of Gazzetta Football Italia on a Saturday morning. The reasons were threefold. First, I preferred playing football to watching it, so on a Sunday I was normally kicking a ball about a park wearing either my Internazionale away top, circa 1989/90, or my Fiorentina home shirt, circa 1990/91. Second, there was James Richardson, who had much more to do hosting Gazzetta than he did introducing Sunday’s games, sitting in front of cafes waving La Gazzeta dello Sport in our faces, bringing us up-to-date with recent events. Third, all of this started off the back of Paul Gascoigne’s move to Lazio in 1992, by which time I was taking my A-levels, shortly to leave for university, which distracted me.
But aside from all that, I’d also become disillusioned with what I perceived to be a waning aesthetic. What had begun in the English First Division in the late 1980s was spilling over onto Italian shores in the early-to-mid 1990s. Umbro, who had hitherto made kits for Cagliari, Lazio and Parma, got their hands on Napoli and Inter’s, absolutely destroying them in the process. Italian brand Lotto muscled in on Torino, Fiorentina, AC Milan and Atalanta, dressing them in shirts that resembled fake replicas sold down weekend markets. ASICS started getting inventive with Sampdoria’s jersey, adding drawstrings around the collar.
Football shirts would never be the same, and probably never will be.

[A splendid selection of quality replica shirts from this era is available at Retrofootball®.]
Posted by JDEvans at 16:50

JDEvans
Sidle out of the store gingerly...